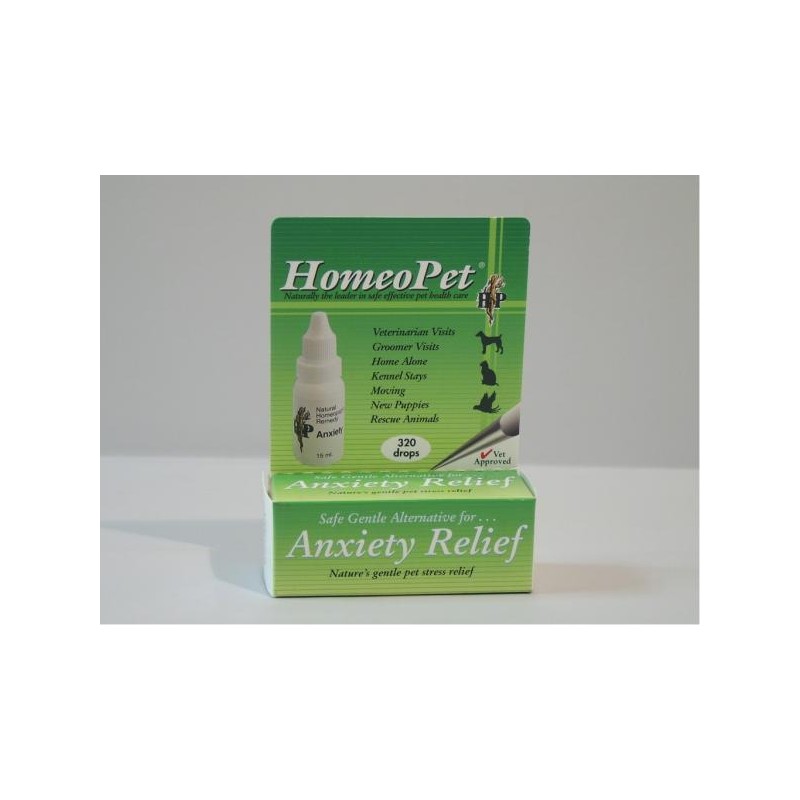 INGREDIENTS Aconitum Napellus 10x 200c   1M(Monkshood) For shock fright fear & terror (sudden onset) or any sudden onset of anxiety especially remaining after a fright.  Fear of being forced into a cage.  Fear is worse at night. Argentum Nitricum 6c 30c 200c(Silver Nitrate) This is a major remedy for all types of anticipatory anxiety for example fear at shows.  Multiple and chronic anxieties often associated with diarrhea.  For example diarrhea on the way to the veterinarian. Arsenicum Album 6c 30c 200c(White oxide of Arsenic) This remedy is for restless anxiety with a desire for company and heat.  They are fastidious individuals.  Avena Sativa 4x 7x(Oatstraw) An anxiolytic producing a sense of calm similar to Valeriana Passiflora & Scutallaria. Calcarea Phosphorica 30c 200c(Calcium Phosphate) Individuals benefitting from this are often narrow chested friendly cats.  They start at sudden sounds and can be destructive clawing and chewing objects. Causticum 30c 200c(Potassium Hydrate) Has a lot in common with Phosphorus on the surface being friendly and sensitive.  They have anxiety about what will happen often ducking their head as if they expect to be hit. Gelsemium 6c 30c 200c(Yellow Jasmine) Used for anticipatory anxiety with trembling and the animal becomes paralyzed with fear.  Diarrhea or involuntary urination may occur when under extreme stress. Hyoscyamus 30c 200c(Henbane) As a member of the solanaceae family which includes Stramonium and Belladona it is a remedy for acute terror and hysteria often stress licking its coat. They are often very vocal individuals. Ignatia 6c 30c 200c 1M(St. Ignatius Bean) Individuals benefitting from this often have a tendency to hysteria even leading into convulsions.  Symptoms to benefit can include self-mutilation coat licking.  Grief affects them badly and anxiety can be associated with urinary problems. Lycopodium 6c 30c(Club Moss) Anticipatory anxiety in individuals prone to digestive upsets or where digestive upsets occur from anxiousness.  They are usually individuals who lack confidence. Natrum Carbonicum 30c 200c(Carbonate of Sodium) Classically super alert to the least external impression starting at the least thing. Passiflora 4x 7x(Passion Flower) Calming anti-convulsant.  Quiets the entire nervous system.  Swift acting and non-addictive. Phosphorus 6c 30c 200c 1M(Mineral phosphorus) Super-sensitive to all external impressions with a fear of the dark thunder and sudden noise.  Friendly yet vet-phobic anticipating any intervention. They are often thirsty and are typically the super-friendly. Pulsatilla Nuttaliana 30c 200c 1M(American Pasque Flower) Clingy and constantly at the owners feet  this remedy works best in individuals who are thirstless and have the peculiar characteristic of being chilly but they like fresh air leading to the cat who sits half  in and half out the window. Scutellaria Lateriflora 4x 7x(Blue skullcap) Restlessness or unease from nervous fear or excitement.   Silica Terra 30c 200c(Pure Flint) Chilly individuals often slow to heal with a strong fear of noise.  Can have timidity with confidence in other areas. Staphysagria 6c 30c(Stavesacre) Anxiety symptoms associated with this remedy’s sphere of action are commonly found in cats for example humiliation and indignation often associated with a change in behavior associated with surgical intervention such as neutering or bullying by another cat leading to inappropriate urination behaviors’ such as spraying skin eruptions or cystitis from emotions. Stramonium 200c(Jimson Weed) A solanaceae family remedy for acute states of fear with terror and a wide-eyed look which can be accompanied by aggression.  Has a strong fear of the dark.  A major remedy for behavioral problems post re-homing or abandonment. Valeriana 4x 7x(Valerian root) Calms Hysetria.  Helps individuals where symptoms are worse for dark for being left alone from separation from owner or other animals or introduction of new animals.

DOSING:DOGS/CATS:  Under 20 lbs/10 kg 5 drops; 21-60 lbs/ 10-30 kg 10 drops; 61-100 lbs/ 30-45 kg 15 drops; over 100 lbs/45 kg 20 drops.  In acute cases the doses can be given every 15 minutes up to 4 doses.  For cases that are not acute one dose 3 times daily; this is often best started 5-7 days before any situation causing anxious behavior e.g. before kenneling.  Once a response is seen administration should be reduced to 2 times daily and eventually once daily.  When symptoms clear up discontinue use.  If reduction causes symptoms to worsen original dosing may be continued a little longer before reducing.  If a remedy is working well and dosing is not reduced an aggravation of symptoms from overuse may occur.  Stopping the remedy for 3 days will reverse the symptoms and then treatment can begin as if using for the first time weaning down as mentioned above.  Pets Under 1 lb:  2 drops in the drinking water 3 times daily. BIRDS:  2 drops in the drinking water once daily. SMALL MAMMALS such as rabbits ferrets hamsters and pot bellied pigs can be dosed by weight as for cats and dogs in previous section.  For severe cases a drop can be diluted in 1 ml of water or other oral rehydration fluid and given to the patient orally taking care to avoid aspiration of the fluid into the respiratory tract by the patient.  3 doses whose volume is appropriate to the size of the patient should be given from the diluted product over a 24 hour period e.g. 2 drops for a mouse or small budgie 4 drops for a large guinea pig.  For acute cases it can be repeated as for cats and dogs in previous dosing section.   ADMINISTRATION:  Optimally the liquid preparation should be dropped directly into the mucous membrane of the mouth including lips; ideally in dogs by pulling out the labial pouch and in cats by raising the head until the mouth opens.  Where an animal finds this distressful or an owner is unable to comply the medication can be put in the food water or milk.  Where animals are sensitive to the odor of the alcohol preservative a 10-20 minute period should be allowed for dilution and evaporation before the liquid or food is presented to the patient.  Occasionally animals will shake their heads as a response to the alcohol preservative; cats may salivate excessively and in these cases presenting it in food water or milk works.  It can also be added to a sprayer and misted in the air around severely affected patients to calm them down or dropped around bedding area 3-5 times daily.   FURTHER ADVICE:  Basic precautions such as having company with the pet where someone will sit and calmly talk to the pet and stroke it if this is appropriate to the pet will all enhance the efficacy of the medicine.  Desensitization with CDs designed to combat phobias can be useful as can be behavioral therapy.  The use of diffusers can be done alongside this medicine but will not in all cases enhance the effect.  The patient should be treated both with and without the diffuser. Chemical sedation can also be used alongside Homeopet Anxiety but it should be possible to use much reduced doses to give the same level of anxiety reduction consequently with reduced side effects and can in many cases be done without completely.

ADVERSE EFFECTS AND CONTRAINDICATIONS:  None known other than reversible effect of  overdosage.  Overdosage will result in a return of symptoms after the symptoms have initially disappeared.   Where either increased anxiety or a return of symptoms occurs while on the medication ceasing to use it will alleviate the effect.  Patients who are hypersensitive to homeopathic preparations will show response to a single dose which may not need to be repeated for some time.  For this reason therapy should always start with a single dose and should a major response be seen therapy should not be recommenced until symptoms relapse and then only a single dose given for maximum effect.  Although there is no evidence that there are any safety issues extra care should always be taken when dealing with pregnant animals