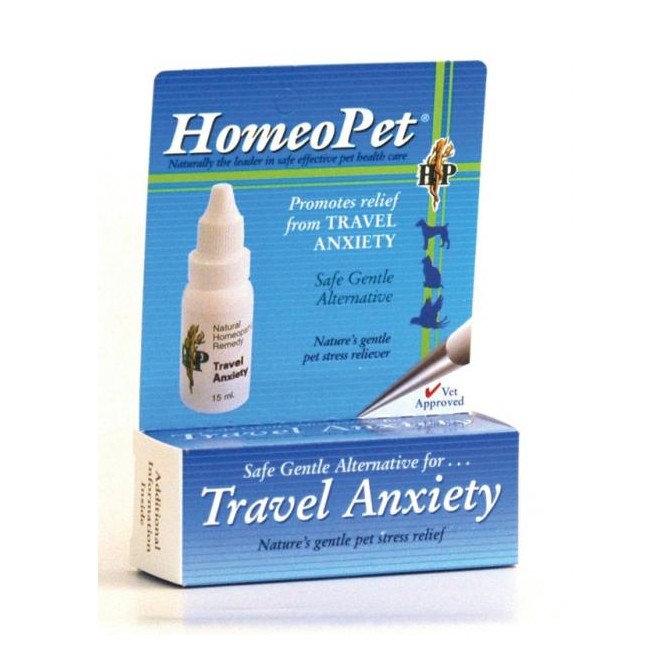 INDICATIONS:  Travel sickness motion sickness fear of travel anxiety getting into a vehicle anxiety even at the sight of a vehicle some cases of claustrophobia fear of getting down off a height. Vertigo from travel or other disturbance of balance mechanism even with head injury.  Some cases of anticipatory anxiety will respond such as fear of public places or fear at a dog show especially in a patient who also shows travel sickness.  Nausea vomiting drooling and salivation with nausea even without motion sickness.

DOSING:   DOGS/CATS:  Under 20 lbs/10 kg 5 drops; 21-60 lbs/ 10-30 kg 10 drops; 61-100 lbs/ 30-45 kg 15 drops; over 100 lbs/45 kg 20 drops.  In acute cases (those with sudden onset) the doses can be given every 15 minutes up to 4 doses.  For cases that are not acute (chronic long term problems) one dose 3 times daily; this is often best started 5-7 days before any situation causing anxious behavior e.g. before traveling.  Once a response is seen administration should be reduced to 2 times daily and eventually once daily.  If reduction causes symptoms to worsen original dosing may be continued a little longer before reducing.  If a remedy is working well and dosing is not reduced an aggravation of symptoms from overuse may occur.  Stopping the remedy for 3 days will reverse the symptoms and then treatment can begin as if using for the first time weaning down as mentioned above. Under 1 lb:  All pets under 1 lb should be dosed by putting 2 drops in the drinking water daily.

BIRDS:  A caged bird can be medicated with 2 drops in the drinking water daily.

SMALL MAMMALS:  Rabbits ferrets hamsters and pot bellied pigs can be dosed by weight as for cats and dogs in previous section. For severe cases a drop can be diluted in 1 ml of water or other oral rehydration fluid and given to the patient orally taking care to avoid aspiration of the fluid into the respiratory tract by the patient.  3 doses whose volume is appropriate to the size of the patient should be given from the diluted product over a 24 hour period e.g. 2 drops for a mouse or small budgie 4 drops for a large guinea pig.  For acute cases it can be repeated as for cats and dogs in previous dosing section.

ADMINISTRATION:  Optimally the liquid preparation should be dropped directly into the mucous membrane of the mouth including lips; ideally in dogs by pulling out the labial pouch and in cats by raising the head until the mouth opens.  Where an animal finds this distressful or an owner is unable to comply the medication can be put in the food water or milk.  Where animals are sensitive to the odor of the alcohol preservative a 10-20 minute period should be allowed for it to dilute and evaporate before the liquid or food is presented to the patient.  Occasionally animals will shake their heads as a response to the alcohol preservative; cats may salivate excessively and in these cases presenting it in food water or milk works.  It can also be added to a sprayer and misted in the air around severely affected patients to calm them down.   FURTHER ADVICE:  The best place for a pet to travel is in the front passenger car well as this is the part of the car that moves the least - the pet should be kept from looking out of the car as much of the stimulus for travel sickness is visual - the air vents should be turned to open and cool and the radio should be turned to a soothing music or talk show.  In the case of dogs they are best tied down to the frame of the seat by their leash so they cannot get up and look out.  Other things that can help are very short journeys (1 telegraph pole to another is more than enough to get started followed by a reward such as a walk with a treat).  Some dogs are better left unfed before a journey while others are better with a little food.  It is extremely rare for a big meal to benefit and takes a lot of cleaning up should it come up.  Chemical sedation can also be used alongside HomeoPet Anxiety but it should be possible to use much reduced doses to give the same level of anxiety reduction consequently with reduced side effects and can in many cases be done without completely.  Can be used on its own or combined with Homeopet First Aid for vertigo from injury.

ADVERSE EFFECTS AND CONTRAINDICATIONS:  None known other than reversible effect of  overdosage.  Overdosage will result in a return of symptoms after the symptoms have initially disappeared.  Where either increased anxiety or a return of symptoms occurs while on the medication ceasing to use it will alleviate the effect.  Patients who are hypersensitive to homeopathic preparations will show response to a single dose which may not need to be repeated for some time.  For this reason therapy should always start with a single dose the previous day and should a major response be seen therapy should not be recommenced until symptoms relapse and then only a single dose given for maximum effect.  Although there is no evidence that there are any safety issues extra care should always be taken when dealing with pregnant animals.