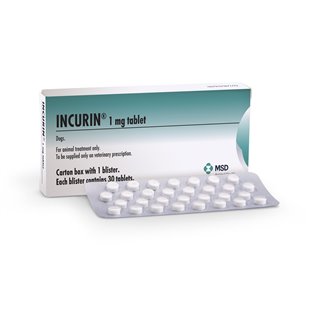 Incurin is used for the treatment of hormone-dependent urinary incontinence resulting from sphincter mechanism incompetence (SMI) in spayed bitches. As the sensitivity of incontinent dogs to estriol is variable, the dose has to be determined on an individual basis. The majority of bitches involved in studies responded positively: they became continent, and remained that way in the long term. The results show that Incurin is efficient and safe to use against urinary incontinence due to SMI in spayed dogs.

Incurin contains the active ingredient Estriol and is available in the following strengths: 1mg Incurin

A Veterinary Pet Prescription is required for Incurin

Incurin is used for the treatment of hormone-dependent urinary incontinence resulting from sphincter mechanism incompetence (SMI) in spayed bitches. As the sensitivity of incontinent dogs to estriol is variable, the dose has to be determined on an individual basis. The majority of bitches involved in studies responded positively: they became continent, and remained that way in the long term. The results show that Incurin is efficient and safe to use against urinary incontinence due to SMI in spayed dogs.

Incurin contains the active ingredient Estriol and is available in the following strengths: 1mg Incurin

A Veterinary Pet Prescription is required for Incurin

Urinary incontinence is a condition that can affect any animal, and is often particularly common in cats and dogs. The root cause of urinary incontinence can be difficult to identify in the first instance, as a great many issues ranging from the medical to the behavioural may be at the root of the issue, and getting to the bottom of the problem is of course the key to effective treatment.

One form of urinary incontinence that can affect cats and dogs is known as hormone-dependent urinary incontinence, and this occurs because of a lack of the oestrogen hormone in female dogs, and testosterone in male dogs. Deficiencies such as these can occur for a range of reasons, which we will examine in more detail within this article.

When dogs are house trained and cats are litter trained or taught to toilet outside, they will usually be very reluctant to toilet in other areas, and so incontinence or urinating within the home should be viewed as a problem in and of itself, as well as due to the obvious mess that it creates.

Toileting within the home, needing to urinate a lot or other problems with urination can have many different causes, and as well as various medical reasons for such problems, behavioural problems such as territorial marking or a lack of training can also cause the problem.

In healthy dogs and cats, the muscles of the urethra are strong enough to allow them to “hold it in” until they are able to go to the appropriate place to toilet, and hormone-dependent urinary incontinence presents itself due to a weakness of these muscles that make your pet unable to control when they go to the toilet.

If your cat or dog needs to urinate frequently, toilets inside of the house, or leaks urine when asleep or at rest, hormone-dependent urinary incontinence may be the problem.

When your cat or dog is young, their body’s production of oestrogen (for females) and testosterone (for males) will not have fully developed, and these essential hormones are most commonly associated with reproduction, but they are also vital for other things too. Oestrogen or testosterone provide strength to the muscles of the bladder, and it is essential that your dog or cat is not spayed or neutered until the body has begun to produce sufficient quantities of these hormones to control their normal functions.

If a dog or cat is neutered when their hormone production has not yet reached its peak levels, the removal of the sex organs effectively halts their production, which is necessary to prevent unwanted breeding. However, early neutering may also cause problems such as hormone-dependent urinary incontinence, which can occur when the body has not yet produced enough of the necessary hormones to regulate other factors, such as bladder control.

Some dogs and cats will naturally have low levels of these hormones, whether they are neutered or not, which can again lead to hormone-dependent urinary incontinence. The condition can also occur as a side effect of conditions such as prostate disease, due to tumours of the bladder, and because of congenital genetic abnormalities. Additionally, a natural drop in oestrogen and testosterone also accompanies old age, and so incontinence is sometimes a side effect of aging.

What can be done about hormone-dependent urinary incontinence?

Your vet will need to run some basic tests on your pet to rule out other potential causes of incontinence, and they will also likely talk to you about your pet’s lifestyle and living situation to rule out behavioural reasons for inappropriate toileting.

Once the condition is diagnosed, treatment depends on the supplementary administration of synthetic hormones to correct the body’s low natural hormone levels, which will in turn help to correct the problem of the incontinence itself.

Can hormone-dependent urinary incontinence be prevented?

Whether or not you can prevent your pet from ever developing a problem such as this largely depends on what causes the problem. Cancers and other systemic problems that lead to secondary complications such as hormone-dependent urinary incontinence cannot usually be prevented, but the condition may correct itself after the cancer is successfully treated.

For pets that have naturally low levels of oestrogen or testosterone, there is nothing that you can do to prevent or correct this naturally, and the problem will usually become apparent from a young age. Some dogs too in old age will produce less oestrogen or testosterone than they need, and again, this is not something that you can foresee or prevent.

However, hormone-dependent urinary incontinence that is caused by spaying or neutering too early can be prevented, by waiting until your cat or dog is fully sexually mature, and so has begun oestrogen or testosterone production before they are neutered.

Best sellers Relevance Name, A to Z Name, Z to A Price, low to high Price, high to low
Viewing 1-1 out of 1
View:

Incurin is used for the treatment of hormone-dependent urinary incontinence due to sphincter mechanism incompetence in spayed bitches. VET PRESCRIPTION REQUIRED 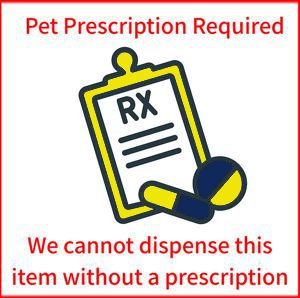