Atopica There are 6 products. 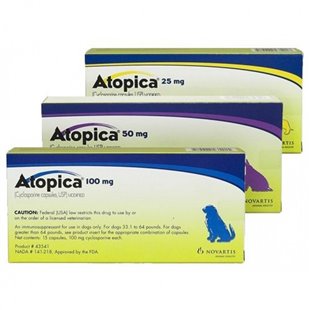 Atopica (or cyclosporine A) is a pet prescription medication that can be prescribed by your vet for the treatment of itchy skin and ear conditions in dogs.

Atopic dermatitis, or atopy in dogs is similar to eczema in people and symptoms are generally first noticed when your dog is between one...

Atopica (or cyclosporine A) is a pet prescription medication that can be prescribed by your vet for the treatment of itchy skin and ear conditions in dogs.

Atopic dermatitis, or atopy in dogs is similar to eczema in people and symptoms are generally first noticed when your dog is between one and three years of age, although in some cases, symptoms may even be noted in puppies. It is thought that as many as 1 in 10 dogs will suffer from atopy with varying degress of severity.

The symptoms of atopy can include itchy ears, chewing of the feet and the legs, an itchy groin, recurrent skin and ear infections. Animals may be affected in one or several regions of the body and the severity of skin disease varies considerably: some dogs become severely affected with widespread skin infections and significant hair loss whilst other dogs may develop mild seasonal skin irritation.

How does Atopica Work?

Atopica specifically targets the immune system cells involved in the allergic response. It contains cyclosporine A, an immunomodulator.

What can Atopica be used for?

Atopica is proven to significantly relieve itchy skin and studies suggest that it is highly effective and improves the quality of life for many dogs. In fact, the vast majority of pet owners would recommend Atopica to a friend. It is generally possible to reduce the dose of atopica as time goes by.

Atopica is only available on prescription and if you suspect your pet is suffering from atopy, it is important that you see your Vet who will be able to diagnose the condition and rule out other causes of skin irritation such as ectoparasites, infection or food allergies.

How is Atopica Administered?

Atopica Capsules are given orally, usually once a day

Atopica is available in the following strengths:

A Veterinary Prescription is Required for Atopica

Atopic dermatitis is the term used to refer to a chronic irritation and inflammation of the skin that is caused by allergies, which can in turn be triggered by a wide variety of different things. Allergies in pets such as dogs and cats can be problematic, as they tend to flare up time and again, and it can be difficult to ascertain the exact trigger or allergenic factor that leads to the condition.

Allergies can be caused by a whole host of things, including common household substances, some ingredients in food, pollen, dust mites, and many other things too, and even if you can find the culprit that is causing the problem, keeping your pet from exposure to their particular trigger can be difficult in itself.

Pets such as dogs and cats that are affected with atopic dermatitis will usually become symptomatic by the time they reach six months of age, although it can take up until the animal is two or three years old for the condition to become very pronounced.

Symptoms of atopic dermatitis in affected areas include:

• Sore or inflamed areas of skin.
• Itching, rubbing, biting or pawing at the affected areas.
• In severe cases, bald patches may develop due to obsessive rubbing and scratching.

What causes atopic dermatitis?
Atopic dermatitis often has a hereditary element to it, and if the ancestors of the affected animal also suffered from allergies and sensitivities, they stand an exponentially higher chance of passing such sensitivities onto their offspring.

A huge range of factors can trigger atopic dermatitis due to a hypersensitivity to their presence, and some of the most common allergenic triggers in cats and dogs include:

• Pollens and other protein particles.
• Dust mites.
• Dander from other animals.
• Mould spores.
• Ingredients in commercial pet foods, or other food allergies.

Diagnosing atopic dermatitis
In order to begin to tackle the condition, you will need to take your pet along to your vet, to try to find the root of the allergy and work out a plan for what can be done to tackle it. There are various ways to go about this, including running serologic allergy tests, intradermal testing, exposure testing, and removing certain elements from the household to see if the allergies improve.

However, atopic dermatitis can be a tricky condition, and it is not always possible to definitively identify the cause of any given pet’s triggering compounds.

The Shar-Pei dog is one breed that is particularly prone to skin problems such as atopic dermatitis, and several other breeds including the West Highland Terrier, Bulldog, Golden Retriever, Labrador Retriever and the Dalmatian are some others.

How is atopic dermatitis treated?
How atopic dermatitis can be treated and tackled largely depends on what is found to be causing the condition, if this can be ascertained. In some cases, you vet may need to work with your pet long term using a method called hyposensitisation therapy, which will reduce the effect that allergenic triggers have on your pet, but can take up to a year to reach peak effectiveness.

Various other options available to your vet include the administration of antihistamines to reduce the effect that the allergy has on your pet, using a product such as Atopica to supress the body’s immune response to the allergenic trigger, or the prescription of corticosteroids to support the body’s natural responses.

Topical treatments such as baths, sprays or lotions may also be recommended to provide relief from the itching.

Can atopic dermatitis be cured?
Atopic dermatitis is a lifelong condition that will tend to come and go, being worse at times than others, and often appearing to go into total remission for long periods of time too. However, the condition rarely goes away entirely, and while you may be able to reduce or eliminate your pet’s exposure to the things that trigger a flare-up of the condition, this does not mean that you can resolve your pet’s reaction to them, nor “cure” their allergy entirely.