Palladia There are 3 products. 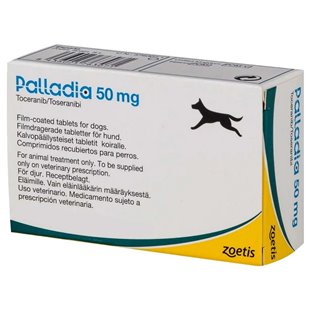 A Vet Prescription is required for Palladia

Palladia is a medication used for the treatment of mast cell tumours in dogs, and is...

A Vet Prescription is required for Palladia

What are mast cell tumours?

Mast cell tumours are also known as mastocytomas, and are a type of round cell tumour that develops from the body’s mast cells. Mast cells form a part of the body’s immune system, and are mainly utilised to generate a reaction to allergens, as well as being an integral part of normal wound healing and defending the body against pathogens.

Mast cells are produced in the bone marrow, and can be found throughout the body of the dog in connective tissue, as a normal part of the immune system. Mast cells produce histamine, which is one of the body’s responses to allergic reactions and tissue damage.

When the body’s mast cells become a malignant tumour, they degranulate and create inappropriate inflammation of the surrounding tissues. Malignant mast cell tumours are highly inflammatory, and can spread throughout the body, sometimes worsening simply as the result of a biopsy or other manipulation.

Around 25% of all tumours diagnosed in dogs are mast cell tumours.

Palladia was originally developed for use in humans, and was used off-label for the treatment of dogs for several years before it was awarded formal approval for canine use as the result of clinical trials.

How does Palladia work?

Palladia is made of the active ingredient Toceranib phosphate, which is a tyrosine kinase inhibitor. This means that Palladia acts against mast cell tumours in two different ways: Firstly it disrupts the blood supply to the tumour, and secondly, it kills the cells of the tumour itself.

This means that Palladia can reduce the size of the tumour, potentially eliminating it entirely, and also that it stops persistent or recurrent tumours from growing and developing.

Is Palladia suitable for use in all dogs?

Palladia for Dogs should not be given to dogs under two years of age, or those that weigh less than 3kg. It is also not suitable for bitches that are pregnant or lactating, or that are intended to be used for breeding later on.

If the tumour is deemed as treatable with surgical intervention, this should be the first choice of treatment before Palladia is considered. Palladia is not suitable for dogs that suffer from gastrointestinal ulcers of bleeds.

Dogs that are prescribed Palladia should be monitored carefully to ensure that the drug is proving effective, and that any potential side effects of the medication are not negating the beneficial effects of the drug.

During the initial stages of treatment, the treatment protocol should be reviewed weekly for the first six weeks, and after this time, at six-weekly intervals or as advised by your veterinary surgeon.

Dosage and adjustments to the relevant dosage for any dog should be based on blood cell count and serum chemistry panels, as well as urinalysis and clinical observation.

How is Palladia given?

Palladia is provided in tablet form in different sizes, prescribed according to the bodyweight of the dog. The tablets can be given either with or without food, and should be swallowed. Generally, Palladia is given at the rate of one tablet per day, every other day. Always administer Palladia in accordance with your vet’s guidelines.

How can I get Palladia for my dog?

Palladia should only ever be given to the dog for which it is prescribed, and you should not stop giving Palladia or change your dog’s dosage without first consulting with your vet first.