Vetoryl Capsules There are 8 products. 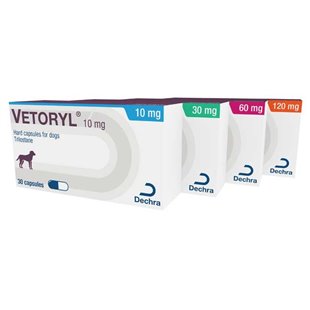 Vetoryl Capsules are used for the treatment of Cushing's disease, also known as hyperadrenocorticism (excess production of corticosteroids from the adrenal glands) in dogs. Cushing's syndrome is one of the most commonly diagnosed canine endocrine disorders. Cushing’s syndrome is usually seen in older dogs and can be eit...

Vetoryl Capsules are used for the treatment of Cushing's disease, also known as hyperadrenocorticism (excess production of corticosteroids from the adrenal glands) in dogs. Cushing's syndrome is one of the most commonly diagnosed canine endocrine disorders. Cushing’s syndrome is usually seen in older dogs and can be either spontaneous or iatrogenic.

This usually happens (in around 85% of cases) because the dog develops a very small, benign tumour at the base of the brain (within the pituitary gland). This hormone produces too much signaling hormone that, in turn, causes the adrenal glands to release excessive cortisol. The remaining 15% of cases are caused by tumours of the adrenal gland(s). Irrespective of the cause of cushing’s disease, treatment is often indicated to reduce the level of cortisol in your pet’s blood stream.

Symptoms of Cushings disease in Dogs include weight gain, hair loss, a pot-bellied appearance, increased thirst and urination. Cushing’s Disease is a common condition in older dogs and can also have a number of un-seen implications, such as a tendency to cause blood clots (blood becomes hyper-coaguable), breathlessness (because of calcification of the airways), liver changes and delayed wound healing. Cushings disease can also lead to diabetes melitus.

Vetoryl works by controlling the excess production of Cortisol, a hormone that regulates many body processes, and is released in increase amounts during stress. Vetoryl is not a cure for Cushing's Disease, but can help control the symptoms. Generally improvement will be seen in several weeks.

Each individual dog responds to Vetoryl differently, but the goal of therapy is to decrease the symptoms related to Cushing's disease (increased thirst and appetite, poor hair coat, etc.). In most cases, the Vetoryl therapy needs to be continued for the life of the dog. If Vetoryl is discontinued, signs will reappear.

Vetoryl capsules are given orally with food and should not be opened or split. Vetoryl may be used for treatment of both pituitary-dependent and adrenal-dependent cushings (hyperadrenocorticism) in dogs.

A Veterinary Pet Prescription is required for Vetoryl

Cushing's disease or Cushing's syndrome in dogs is also known as hyperadrenocorticism, and is a condition that affects the body’s endocrine system, responsible for the metabolism of food.

Cushing's disease is caused by an increase of the body’s natural cortisone levels, a type of corticosteroid that is vital for normal function, but that can cause problems when too much cortisone is produced. A benign (non-cancerous) tumour or enlargement of the pituitary gland (which regulates cortisol production) is the most common cause of canine Cushing’s disease, and this in turn can affect a whole number of the body’s systems, which means that the symptoms of the disease can be very variable.

Cushing’s disease is one of the most common endocrine disorders that can arise within the dog, and so it is a good idea for all dog owners to gain a basic understanding of the condition, and learn to spot the potential symptoms of the condition.

What causes Cushing’s disease in dogs?
As mentioned, Cushing’s disease or hyperadrenocorticism in dogs is most commonly caused by a benign tumour of the pituitary gland, although malignant pituitary tumours may also cause the condition in a much smaller number of cases. Even less common still is an adrenal gland tumour, which in turn may be either benign or malignant.

Treatment with certain allergy medications or hormone replacement therapy for low cortisone levels can also lead to the later development of Cushing’s disease as a secondary side effect.

Diagnosing Cushing’s disease
In order to make a definitive diagnosis of Cushing’s disease in the dog, your vet will need to perform a full physical examination, and run blood and urine panels as well.

Once your vet has reached a diagnosis of Cushing’s disease in your dog, they will need to perform some additional tests to find out what is causing the condition, and investigate any tumours present to check whether or not they are malignant.

Can Cushing’s disease in dogs be cured or treated?
There are a variety of different ways of tackling Cushing’s disease in the dog, depending on what your vet identifies to be the root cause of the problem. If your vet identifies an adrenal tumour, generally this will need to be surgically removed, while for pituitary tumours, how your vet chooses to proceed will depend on whether the tumour is malignant or benign, and how easy it will be to potentially remove.

In the case of non-malignant tumours causing the condition, the most common course of treatment is medication to regulate the body’s cortisone production, and keep its production within normal, healthy parameters.

A medication called Vetoryl is the most commonly used and most effective medication used in the ongoing management of Cushing’s syndrome in dogs, and is suitable for the treatment of both pituitary-based and adrenal-based problems.

Any medication to treat Cushing’s disease can have the potential to cause certain side effects in your dog as well, so it is important to keep an eye out for the possibility of adverse reactions to the medications, with some common side effects including loss of appetite, lethargy, and potentially, vomiting and/or diarrhoea.

While these side effects will often lessen in severity with time, it is important to talk to your vet if you run into any problems, as this may necessitate the medication being stopped, and potentially require the administration of Prednisolone tablet such as Prednicare in order to correct the problem.

Once your dog’s condition has stabilised and a course of regular medication has been found to be effective for your dog, you will need to schedule regular follow-up appointments with your vet every few months (or more frequently if your dog is having other problems) in order to assess the effectiveness of the medication, and how the condition is progressing.