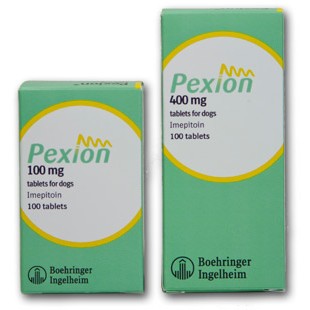 A Veterinary Pet Prescription is required for Pexion Tablets

Pexion is a medication designed to treat primary epilepsy or idiopathic epilepsy in dogs, by reducing the amount of seizures that your dog suffers from, and limiting the overall effect that they have on your dog’s...

A Veterinary Pet Prescription is required for Pexion Tablets

Pexion is a medication designed to treat primary epilepsy or idiopathic epilepsy in dogs, by reducing the amount of seizures that your dog suffers from, and limiting the overall effect that they have on your dog’s day to day life. The active ingredient in Pexion is Imepitoin, and Pexion comes in tablet form in doses of 100mg and 400mg respectively.

Pexion may be prescribed to dogs diagnosed with primary or idiopathic epilepsy, which is, epilepsy for which the root cause is unknown. Prescription of Pexion for your dog should be considered carefully by your vet, after evaluation of the various alternative options.

Pexion is used to reduce the frequency rate of generalised epileptic seizures or fits in dogs, being the large-scale grand mal seizures that affect the whole of the brain.

Pexion contains the active ingredient Imepitoin, which is an anti-epileptic drug. As epileptic seizures are triggered by storms of excessive electrical nerve impulses in the brain, Imepitoin works by partially activating the receptors for a neurotransmitter called gamma-aminobutyric acid or GABA, which allow the brain’s nerve cells to send messages to each other. GABA is responsible for partially reducing the electrical activity generated by firing nerve signals in the brain, and so by activating the brain’s GABA receptors, Imepitoin increases the effects of the GABA receptors, which helps to prevent seizures.

Imepitoin also has a limited effect on the calcium channels of the brain, pores that move calcium into the nerve cells to allow the transmission of electrical impulses, which in turn, helps to control seizures.

Is Pexion suitable for all dogs?

Pexion should not be used for dogs that have proven to be hypersensitive to Imepitoin or any of the inactive ingredients of the medication. Pexion is unsuitable for use in dogs with serious cardiovascular disorders, or severely impaired renal or hepatic function.

Pexion has not been trialled in dogs weighing less than 5kg, nor in dogs with chronic conditions such as renal, liver, heart or gastrointestinal disorders.

Pexion should not be used as the primary form of treatment for dogs that suffer from cluster seizures or status epilepticus (seizures that continue for more than 30 minutes at a time), as the medication has not been trialled for use in cases with this presentation.

Pexion comes in tablet form, and is given orally. The dosage rate for Pexion ranges from 10mg-30mg of Imepitoin per kg of the dog’s bodyweight given twice daily at twelve hourly intervals. Tablets are sold in 100mg Pexion or 400mg Pexion sizes and can be halved if appropriate.

Initial treatment usually involves using the lowest possible dosage rate for the size of the dog, with observation undertaken for the first week of treatment to ascertain its effectiveness. If the initial dose is well tolerated but does not prove as effective as it could be, the dosage rate can be increased up to a maximum of 30mg/kg per dose.

Are there any side effects?

Pexion is generally well tolerated by dogs with few to no side effects, and any side effects that do present are usually transient, and will go away once your dog has got used to the medication.

During the initial stages of treatment, your dog may display some of the following symptoms:

Most of these side effects will remain very mild, if they present at all, and will usually go away on their own after a few days of treatment. Speak to your vet in the interim if you have any concerns about side effects, or if the side effects your dog experiences are very pronounced.

Do not stop giving your dog Pexion or alter their dosage without speaking to your vet first.

How can I get Pexion for my dog?

Pexion is a POM-V medication, which means that it is a prescription-only product that is designed for use in dogs and can only be attained with a veterinary prescription.

Once your vet has decided that Pexion is the best form of treatment for your dog’s epilepsy, you ask your vet to issue you with a veterinary prescription that you can then use to purchase Pexion from us. 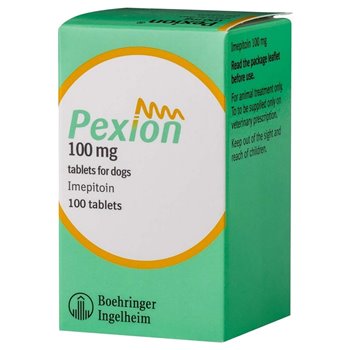 100mg Pexion is a treatment for dogs with primary epilepsy. Pexion acts on a specific receptor in the brain cells to reduce the amount of excessive electrical activity present. VET PRESCRIPION REQUIRED 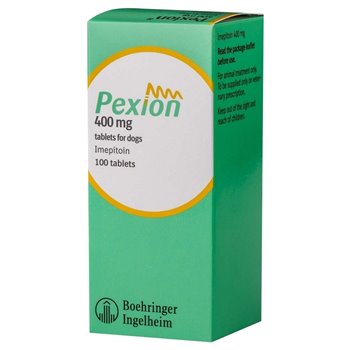 400mg Pexion Tablets are a treatment for dogs with primary epilepsy. Pexion acts on a specific receptor in the brain cells to reduce the amount of excessive electrical activity present. VET PRESCRIPION REQUIRED