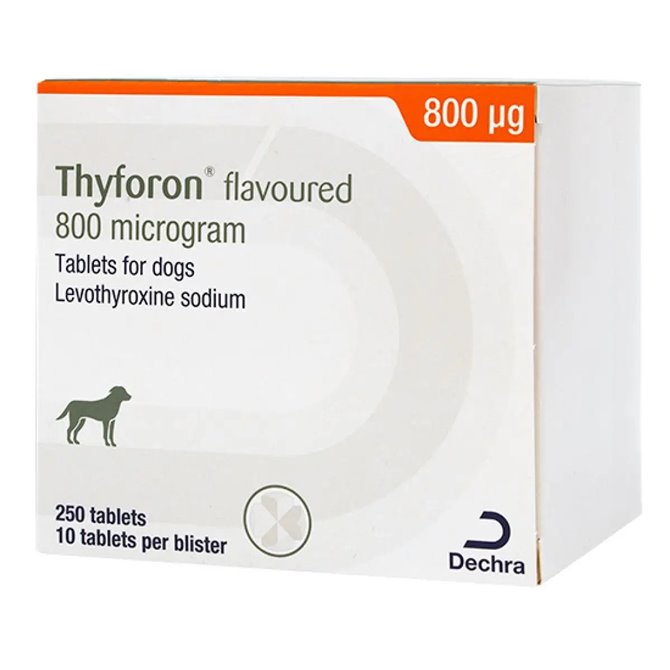 Thyforon 800 is used for the treatment of hypothyroidism in dogs. VET PRESCRIPTION REQUIRED

This medication may only be supplied with a valid veterinary prescription issued by your vet. You should only purchase this item if you have or are in the process of arranging such a prescription. See information bar for further details.

Forthyron are white/off-white round tablets scored on one side. Each Forthyron Tablet is divisible into 4 parts.

Pharmacokinetic particulars
Some dogs appeared to consistently either absorb L-thyroxine better and/or eliminate it more slowly than do other dogs. Furthermore absorption and elimination rate is influenced by daily intake of levothyroxine sodium (high absorption/low elimination in case of low intake and vice versa in case of high intake). The variability in pharmacokinetic parameters between individual dogs is considerable and although the presence of food may affect absorption it is considered to have a minor effect on the parameters overall. Absorption is relatively slow and incomplete: In most cases Tmax occurs between 1 to 5 hours after oral administration mean Cmax varies more than 3 fold between dogs on the same doses. In adequately dosed dogs the plasma peak approaches or slightly exceeds the upper limit of normal plasma T4 levels and by the end of 12 hours after oral administration plasma T4 usually declines to the lower half of the normal range. The rates of disappearance of T4 from the plasma are slowed in hypothyroidism. A large part of the thyroxine is taken up by the liver. L-thyroxine is bound to plasma-proteins and plasma lipoproteins. Part of a dose of thyroxine is metabolised to the more potent triiodothyronine (T3) by deiodination. The process of deiodination continues. These further deiodinated metabolic products (other than T3 and T4) do not have thyromimetic activity. Other pathways of thyroid hormone metabolism include conjugation to form soluble glucuronides and sulphates for biliary or urinary excretion as well as cleavage of the ether linkage of the iodothyronine molecule. In the dog over 50% of the T4 produced each day are lost in the faeces. The extrathyroidal body stores of T4 are eliminated and replaced in about 1 day. Clinical particulars Target species Dogs. Indications for use For the treatment of hypothyroidism in dogs.

Contra-indications
Do not use in dogs suffering from uncorrected adrenal insufficiency. Special warnings for each target species The diagnosis hypothyroidism should be confirmed with appropriate tests. Special precautions for use in animals A sudden increase in demand for oxygen delivery to peripheral tissues plus the chronotropic effects of levothyroxine sodium may place undue stress on a poorly functioning heart causing decompensation and signs of congestive heart failure. Hypothyroid dogs suffering from hypoadrenocorticism have a decreased ability to metabolise levothyroxine sodium and therefore an increased risk of thyrotoxicosis. Dogs with concurrent hypoadrenocorticism and hypothyroidism should be stabilised with glucocorticoid and mineralocorticoid treatment prior to treatment with levothyroxine sodium to avoid precipitating a hypoadrenocortical crisis. After this thyroid tests should be repeated then gradual introduction of levothyroxine therapy starting with 25% of the normal dose increasing by 25% increments every fortnight until optimal stabilisation is achieved is recommended. Gradual introduction of therapy is also recommended for dogs with other concurrent illnesses; particularly diabetes mellitus and renal or hepatic dysfunction. Special precautions to be taken by the person administering the product Wash hands after administering the tablets. Pregnant women should handle the product with caution. Adverse Reactions Restoration of physical activity may unmask or intensify other problems such as osteoarthrosis. Adverse effects of thyroid hormones are generally associated with excessive dosage and correspond to the symptoms of hyperthyroidism. See also section `Overdose`. Use during pregnancy lactation or lay The safety of use of the product during pregnancy has not been established through special reproduction studies. However levothyroxine is an endogenous substance and thyroid hormones are essential for the developing foetus especially during the first period of gestation. Hypothyroidism during pregnancy may result in major complications such as foetal death and a poor perinatal outcome. Maintenance dose of levothyroxine sodium may need adjustment during pregnancy. Pregnant bitches should therefore be monitored on a regular base from conception until several weeks after delivery. Interactions A variety of drugs may impair plasma or tissue binding of the thyroid hormones or alter thyroid hormone metabolism (eg. barbiturates antacids anabolic steroids diazepam furosemide mitotane phenylbutazone phenytoin propranolol large doses of salicylates and sulphonamides.). When treating dogs that are receiving concurrent medication the properties of these drugs should be taken into consideration. An increase in the dosage of digitalis may be necessary in a patient that had previously compensated congestive heart failure and that is placed on thyroid hormone supplementation. Estrogens may increase thyroid requirements. Ketamine may cause tachycardia and hypertension when used in patients receiving thyroid hormones. The effect of catecholamines and sympatiomimetics is increased by levothyroxine. Following treatment of hypothyroidism in dogs with concurrent diabetes careful monitoring of diabetic control is recommended. Most dogs on chronic high- dose daily glucocorticoid therapy will have very low or undetectable serum T4 concentrations as well as subnormal T3 values. Amounts to be administered and administration route The recommended starting dosage of levothyroxine sodium is 10g/kg body weight orally every 12 hour. Because of variability in absorption and metabolism the dosage may require alterations before a complete clinical response is observed. The initial dosage and frequency of administration are merely a starting point. Therapy has to be highly individualised and tailored to the requirements of the individual dog. When initiating dosing of dogs weighing less than 5 kg bodyweight a quarter of one 200mg tablet should be administered once daily. Such cases should be monitored carefully. In the dog absorption of levothyroxine sodium may be affected by the presence of food. The timing of treatment and its relation to feeding should therefore be kept consistent from day to day. To adequately monitor therapy trough values (just prior to treatment) and peak values (about three hours after dosing) of plasma T4 can be measured. In adequately dosed dogs peak plasma concentration of T4 should be in the high-normal range (approximately 30 to 47 nmol/l) and trough values should be above approximately 19 nmol/l. If T4 levels are outside this range the levothyroxine dose can be adjusted in 50 to 200 �g increments until the patient is clinically euthyroid and serum T4 is within the reference range. Plasma T4 levels can be retested two weeks after change of dosage but clinical improvement is an equally important factor in determining individual dosage and this will take four to eight weeks. When the optimum replacement dose has been attained clinical and biochemical monitoring may be performed every 6 � 12 months. To break a 200 �g tablet accurately and easily place the tablet score side up and apply pressure with your thumb. Forthyron Overdose Following administration of overdoses thyrotoxicosis could occur. Thyrotoxicosis as a side effect of mild oversupplementation is uncommon in dogs owing to the canine ability to catabolize and excrete thyroid hormones. In case of accidental intake of large amounts of Forthyron tablets absorption can be decreased by induction of vomiting and oral administration of both activated charcoal and magnesium sulphate once. Overdoses of three up to six times label recommended starting dose for 4 consecutive weeks in healthy euthyroid dogs resulted in no significant clinical signs that could be attributed to treatment. Single overdose up to 3-6x the recommended dose does not pose a threat to the dog and no actions are necessary. However following chronic over-supplementation clinical signs of hyperthyroidism such as polydipsia polyuria panting weight loss without anorexia and either or both tachycardia and nervousness may theoretically occur. The presence of these signs should result in evaluation of T4 serum concentrations to confirm the diagnosis and immediate discontinuance of the supplementation. Once the signs have abated (days to weeks) the thyroid dosage has been reviewed and the animal has fully recovered a lower dosage may be instituted with the animal being monitored closely. Withdrawal periods Not applicable.   Pharmaceutical particulars List of excipients Calcium hydrogen phosphate dihydrate Cellulose Micorcrystalline Sodium Starch Glycolate (type A) Magnesium stearate. Major incompatibilities Not applicable. Shelf life 2 years. Tablet portions can be kept for 4 days in the blister pack. Special precautions for storage Do not store above 25�C