> Prescription Only Drugs>R-U>Trocoxil for Dogs
Trustpilot

Trocoxil for Dogs There are 5 products. 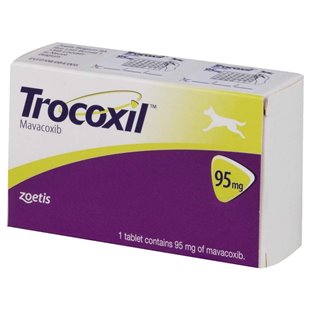 Trocoxil is a prescription-only medication used for the treatment of pain and inflammation associated with degenerative joint disease or osteoarthritis in dogs aged 12 months or more.

Trocoxil contains the active ingredient Mavacoxib and is a relatively new treatment for arthritis in dogs. Trocoxil is available in brown tablet ...

Trocoxil is a prescription-only medication used for the treatment of pain and inflammation associated with degenerative joint disease or osteoarthritis in dogs aged 12 months or more.

Trocoxil contains the active ingredient Mavacoxib and is a relatively new treatment for arthritis in dogs. Trocoxil is available in brown tablet form (with Pfizer embossed onto the tablet) and in strengths of 6mg, 20mg, 30mg, 75mg or 95mg. In comparison with other arthritis treatments in animals, Trocoxil can be administered relatively infrequently due to the drug's prolonged duration of action.

Trocoxil is a non-steroidal anti-inflammatory drug (NSAID). Trocoxil works by inhibiting an enzyme known as cyclooxygenase (particularly cyclooxygenase-2) that is responsible for prostaglandin synthesis. By stopping this enzyme (COX-2) from working, the inflammatory effect is reduced and animals become more comfortable. Because osteoarthritis is an inflammatory condition, Trocoxil and other NSAIDs are highly effective at controlling this form of pain and often bring much needed relief to a stiff, sore and arthritic animal. Many owners report that their pet has a 'new lease of life' following the use of Trocoxil.

Trocoxil is a POM-V medication

Trocoxil is the trade name for the Non-steroidal anti-inflammatory drug (NSAID) Mavacoxib, which is designed for the treatment and management of degenerative joint disease in dogs. Trocoxil is distributed in the UK by Zoetis UK Limited, and is a relatively new addition to the veterinary NSAID arsenal.

Trocoxil is an NSAID from the same class as some other widely used medications such as Metacam and Rimadyl, but with one significant difference. Trocoxil has a very slow release rate, and is eliminated from the body of your dog much less quickly than the alternatives, which means that after your dog is treated with an initial loading dose, they will only need to be administered with the medication once a month.

This eliminates the need for daily medications, and so removes the many challenges that can accompany this, such as a lack of compliance from the dog, the difficulties of keeping to a regular schedule, and the problems of forgetting the occasional dose.

Trocoxil is indicated in the treatment of degenerative joint disease in dogs, such as arthritic pain and other chronic conditions that lead to inflammation, swelling, heat and pain in the joints.

Conditions such as these cannot be surgically corrected or fully cured, and so keeping your dog comfortable and happy with a good quality of life depends on the day to day management of their condition, which in turn, usually relies upon a combination of factors.

Keeping your dog’s weight within healthy parameters can help to reduce pressure on the joints and the pain that can accompany this, and physical therapies can also help to extend your dog’s range of movement and the suppleness of their joints. However, in order to address the pain, swelling and inflammation that accompany degenerative joint conditions in the dog, NSAIDs are commonly used to keep your dog comfortable and allow them to retain a good range of mobility in comfort.

Trocoxil is one of several NSAIDs that your vet may consider prescribing for your dog, and if your dog is already undergoing treatment with a daily pill or other medication, it may be worth asking your vet to consider changing your dog over to Trocoxil. As Trocoxil is administered monthly and not daily, the product provides numerous advantages for dog owners when compared to alternatives.

Trocoxil contains the active ingredient Mavacoxib, which is part of the class of medications called NSAIDs, and has both anti-inflammatory and analgesic properties.

Mavacoxib inhibits the cyclo-oxygenase (COX) enzymes, and has a preferential effect on COX-2 over Cox-1, which means that the occurrence rate of side effects such as gastrointestinal symptoms is lower when compared to nonselective products.

Mavacoxib is eliminated from the body much more slowly than alternative products, resulting in a prolonged anti-inflammatory effect on inflamed joints, and means that the medication needs only to be given once a month after an initial two week loading dose.

Trocoxil comes in tablet form, and is taken orally. After the initial two week loading dosage, the dosage rate for Trocoxil is 2mg/kg of bodyweight given once per month. Trocoxil should be administered with food, to increase its uptake rate by the body.

Is Trocoxil suitable for all dogs?

As with all NSAIDs, the use of Trocoxil should be carefully considered, as over time, NSAIDs may compromise some of the body’s core functions. Certain dogs should not be prescribed Trocoxil, or may be more sensitive to suffering from ill effects of the medication. The following guidance is provided for the use of Trocoxil in dogs:

How can I get Trocoxil for my dog?

Trocoxil is one of several NSAIDs that your vet may consider prescribing to your dog, and they should discuss the options with you in detail, as well as their merits and potential downsides.

If your vet decides that Trocoxil is the best option for your dog, they can issue you with a veterinary prescription to allow you to purchase Trocoxil from us.